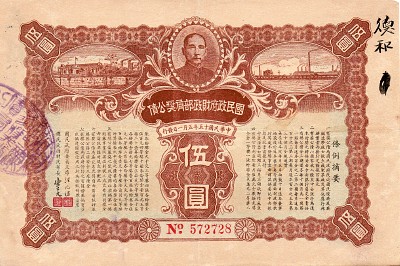 Background
A short term bearer bond in note form for payment of taxes or other Government obligations. K101-1, of which this note is a derivative was used to fund the Northern Expedition of the Kuo Min Tang under Chaing Kai Shek. Owners were promised interest, prizes up to $20,000 based on public lottery. Signed by Wang Ching Wei chairman of the National Government and T. V. Soong as Minister of finance.