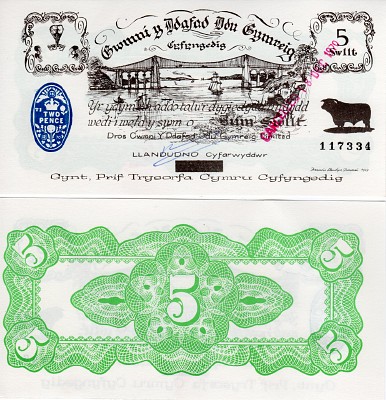 The Welsh pound notes issued by the Chief Treasury of Wales were first issued in 1969.
The issuers were technically Richard Williams and his wife, but the brain behind the scheme was Richard Williams' own. He wished to create a International Currency which could be used instead of gold. An international currency is a grand idea and it is considered good for man to reach beyond his grasp, to aspire to great things, to dream great dreams.

Unfortunately, Mr Williams had reached beyond his grasp and his plan eventually collapsed. In the interim period, the British officials had come up with ever-changing requirements and one very early issue was forced to have "2d paid" imprinted on them as they were seen as receipts or cheques. The British officials then changed their minds and came up with other hoops for Mr Williams to jump through. These are hard to find, cancelled or nay.

Variants of this item: