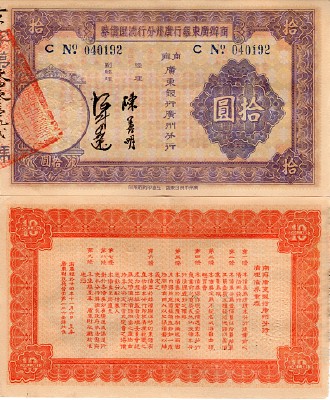 Liquidation note of the Canton Mercantile Bank. (Canton Branch office) (Shan Pan Kuang Tung Yin Hang Kuang Chou Feng Hang Ch'ing Li Tsai Chuan. This note was issued by the Canton Mercantile Bank of Canton Branch Office at its liquidation. The notes fell into five denominations: $1, $5, $10, $50 and $100; but the total amount did not exceed five million dollars. The rules set out on the reverse were approved by the Treasury Department of the Government of Kuang-tung Province, on 6th November, 1935.